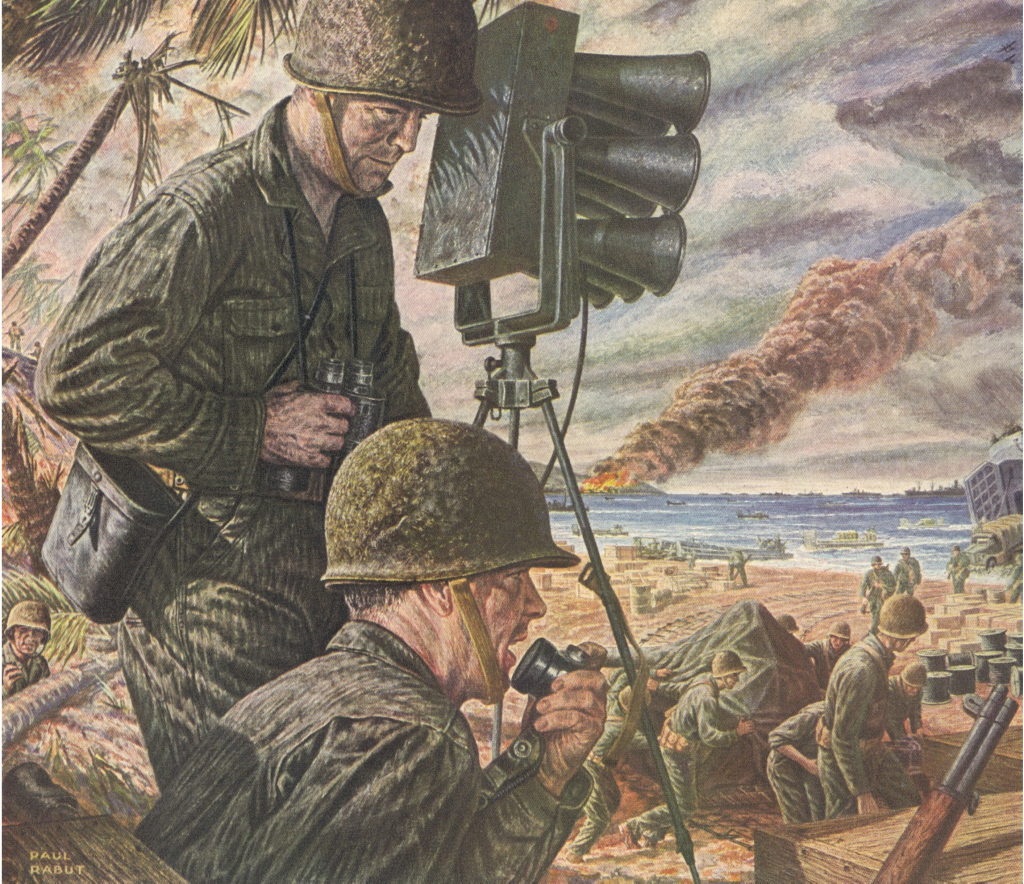 There are certain things in our experience as humans today that are unprecedented. We experience things which before you would not be able to live through and tell about. Speed is one such experience- to experience great velocity meant falling off a cliff or into a ravine, not exactly something repeatable or pleasurable. Being on a horse was about as fast as you could go until the 20th century. Now owning a car or motorcycle capable of 200mph is, if not commonplace, possible without even being a professional racer. Speed is so seductive in large part because of the adrenalin it releases, and we like adrenalin. It’s a key component of our “fight or flight” survival system, reacting to potentially dangerous situations. People love roller coasters because they put us in a very strange situation – your mind knows you’re completely safe, your body is telling you the opposite.

Loudness is actually very similar to speed in the kind of adrenal system reactions it provokes. That’s because loudness in nature was almost always keyed to great peril for primitive humans. Avalanches, proximate lighting strikes, tornadoes, stampeding anything (like elephants) are not a good thing for humans to be around, and our hearing and brains are hard wired to tell us so. Very loud sounds trigger a lot of adrenaline. Our hearing never goes to sleep, the pathway between the ear and the brain is direct and requires no thought. Just as with roller coasters and speed, we’ve discovered how powerful loud sounds and especially music can be, addictively so.

The ability to produce or reproduce very loud sounds, excluding warfare, is an extremely new phenomenon. Outside of marching bands, the technology just didn’t exist. Film soundtracks were not very loud until very recently, and it was not until the movie Earthquake (1974) that theaters were even equipped with equipment that could reproduce very low sounds, which are essential for the full physical effect of loudness. Sound is energy and low, bass sounds contain most of it. If you drop a metal spoon on a concrete floor the resulting sound (about 135db) is incredibly loud (a jet engine on takeoff is about the same SPL) but its so short in duration and so high in pitch that we don’t feel it as such. A sound level of 115db with a large bass content is so loud that you feel it in your sternum and your pants (provided they’re not skinnies) are flapping in the sonic wind. There was a Maxell tape ad in the 1970’s which showed a man in a chair literally being blown away by the sound from a speaker. The speaker shown in the ad could never produce that effect, but we wanted it so bad that we pretended it was true. That ad has been embossed on the collective memory of everyone who ever saw it. This kind of sound reproduction is only several decades old, the equivalent of the blink of an eye in human history.

With a big enough horn and enough juice, you can create sound waves powerful enough to punch holes in reinforced concrete, and Tom Danley of Danley Sound Labs built horns for NASA that couldlevitate things. That’s so loud that if you were unfortunate enough to be present your hearing would be instantly destroyed, forever.

Rock concerts are about as loud as you’ll ever hear. In the beginning of pop/rock music reproduction, a single cinema horn speaker like an Altec A-7 Voice of the Theater would have covered a whole venue. That’s how two kids did it back in the late 1950’s. Roy and Gene Clair, a couple of teens from Lancaster, Pennsylvania started the whole industry of touring rock concert sound reproduction with that speaker, adding more and more of them until you had a veritable wall of sound. Later, Roy Clair developed his own horns which were more powerful and more compact, so you could fit more firepower into a truck and fly them over the stage. There has been a virtual arms race in the PA industry to develop ever more compact and powerful speaker systems capable of ever greater SPL’s (Sound Pressure Level, measured in dB). Almost all of these systems still use horns, but the advent of incredibly powerful and cheap solid state Class D amplifiers enables these horns to be very small because they can be fed by huge amounts of power. I recently visited the Clair facility in Manheim, Pennsylvania where they have a full size concert venue to test and demonstrate their systems. There were two very small amplifier racks running two huge line arrays (the current, dominant type of PA speaker configuration) hanging over the stage. The sonic power of this system was actually frightening. Each amp rack was rated at 40,000 watts. 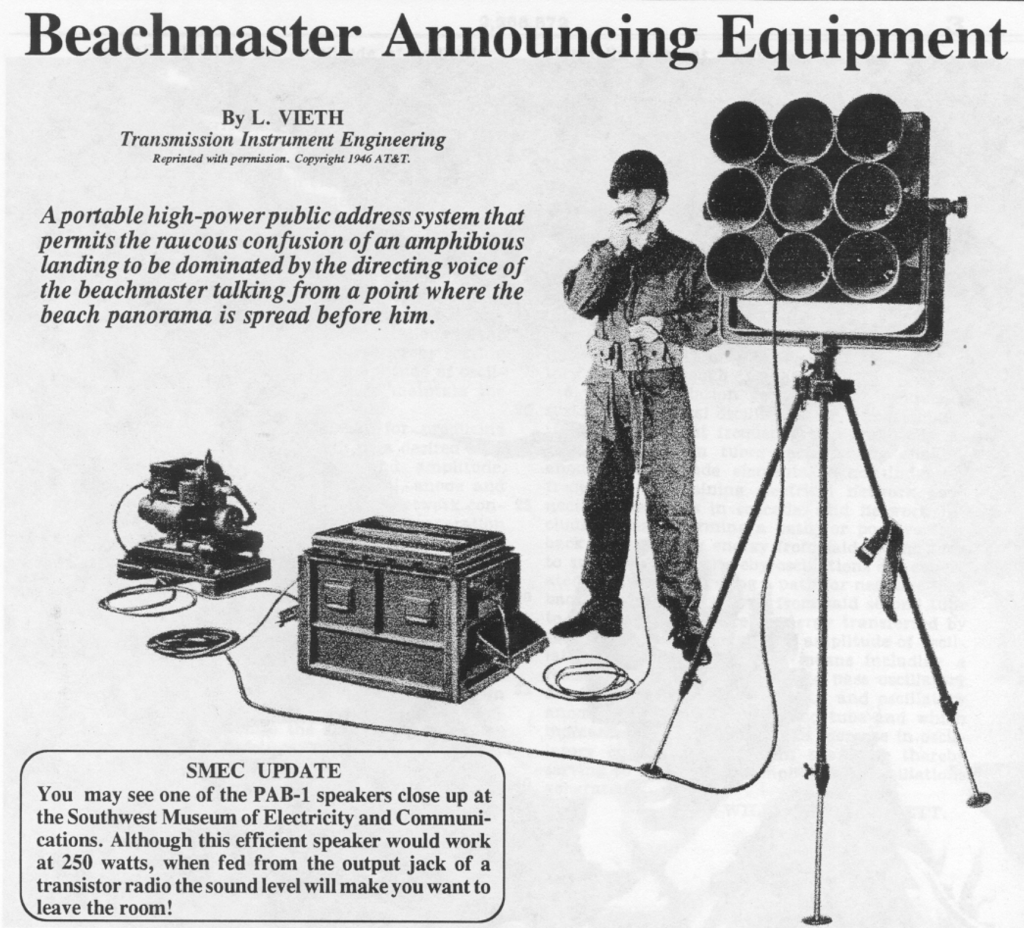 In these types of systems as many as 8 compression drivers feed into a single horn throat (for each array module, and there are always many of them), in the same way as the Western Electric BeachMaster system used on landing craft in WWII and later on helicopters. If you remember the battle scene in Apocalypse Now, with Wagner’s Ride of the Valkyries blaring down from the copters, those were BeachMasters. Just one of the compression drivers in a line array horn can reach 120db spl or more, and when you feed 8 of them into a single, rather small horn throat there is so much energy pouring into such a confined volume that the air in the throat can actually break down and not behave, as seen by the sound waves, like air any longer. In terms of physics, that marks the limit of how loud the speaker can be. With bass, a whole new generation of obscenely powerful 21” woofers with enormous Neodymium magnets has emerged, and when two of these are placed in a refrigerator size box, as I recently heard at a pro sound demo, SPL’s of 125db with virtually no distortion can be achieved. At that volume level at 40-50Hz  your internal organs feel like they are being massaged within your body. Its an uncanny sensation, one that no one has really experienced before, because  such speakers never existed before.

At OMA we actually use those same 21” woofers, though a version with the best sound for our Imperia system, not the highest possible power handling. The idea is not to get your pants flapping, but to have sound at any level with no distortion. This makes an OMA speaker like the Imperia a potential hazard, because you can turn up the volume to extremely high levels and not have any idea how loud it really is. When I demonstrate the Imperia at our Brooklyn showroom using something that should be played really loud, like Michael Jackson’s “Billy Jean” or Kraftwerk’s “Elektro Kardiogramm”, I usually use the sound pressure meter app on my iPhone to show the listener just how loud it is – around 110db peak. At that level, you can actually have a conversation- the distortion is so low. Distortion is what tells you that music or the sound inside a restaurant, for example, is annoyingly loud. I’ve measured sound levels in Manhattan restaurants like MoMoFuKu’s Ramen bar at 94db, and in that reverberant space any kind of conversation was just about impossible without yelling in someone’s face. Absent distortion, you might keep turning the music up, because all the signals you’ve learned to analyze loudness by are gone. Add alcohol into the equation, which reduces our sensitivity to loudness, and you might find yourself listening at 115db,  which is not a great idea for your long term hearing.

Maybe we need to add a warning for the Imperia –  Listen Responsibly.