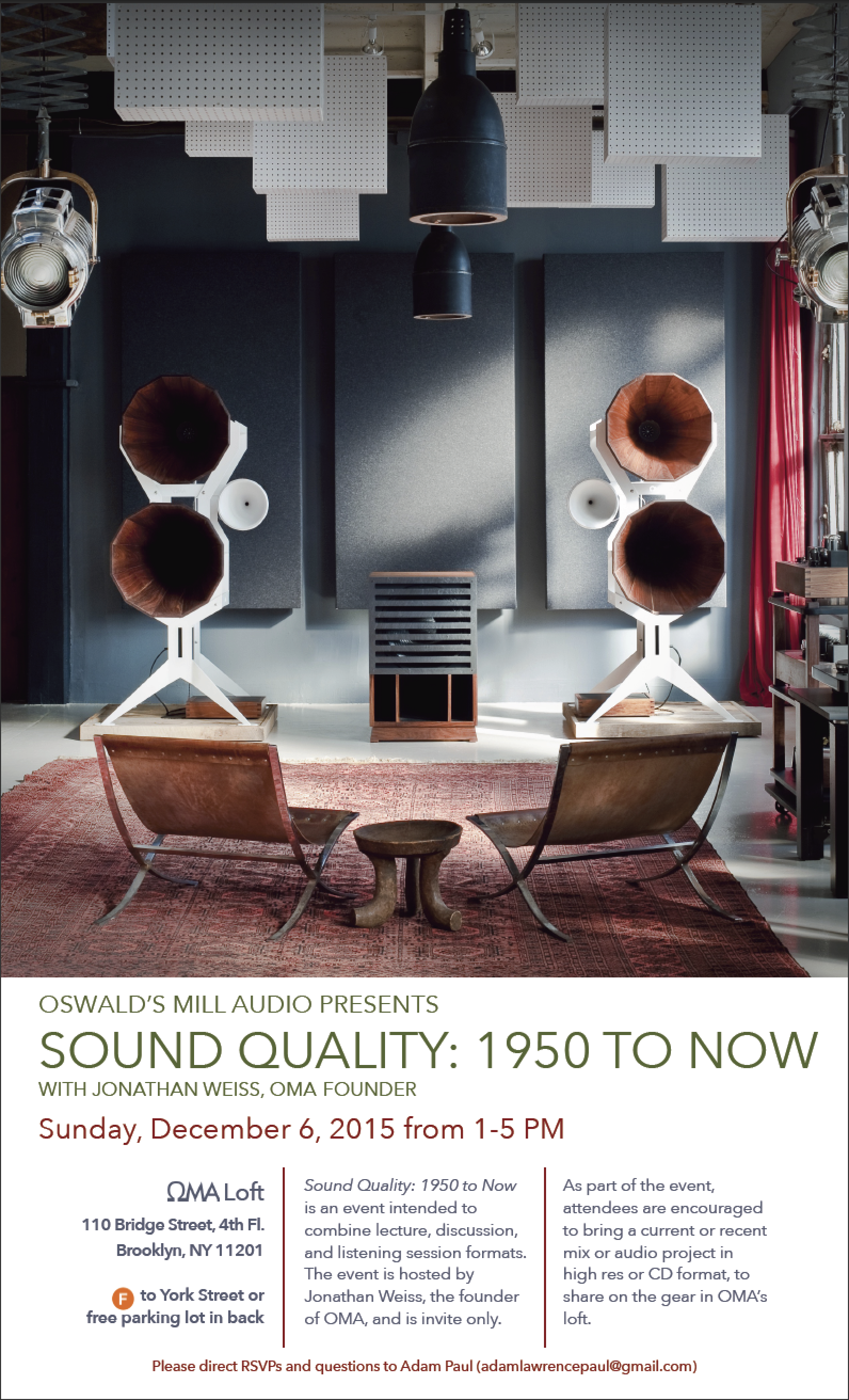 Last Sunday I had the pleasure of hosting a dozen young industry professionals and soon to be professionals, mainly graduates of the program at the University of Connecticut at Hartford in acoustics. Some were working as acousticians in New York City, others were music producers or engineers, I think everyone was in their 20’s. There was a theme, suggested by the young man who organized the event (an acoustician) who had visited OMA prior, and heard me play a reissue of Duke Ellington’s Masterpieces on vinyl, a Long Play mono LP recorded on December 19th, 1950. If you ever have the opportunity to listen to that record on a good system with a real mono cartridge, you’ll understand. Sixty five years later, you sit there shaking your head and wondering what the f—-k happened to recorded sound in the last six plus decades. Adam, the organizer in his 20’s, had the same experience and suggested both the event and the title for the day. 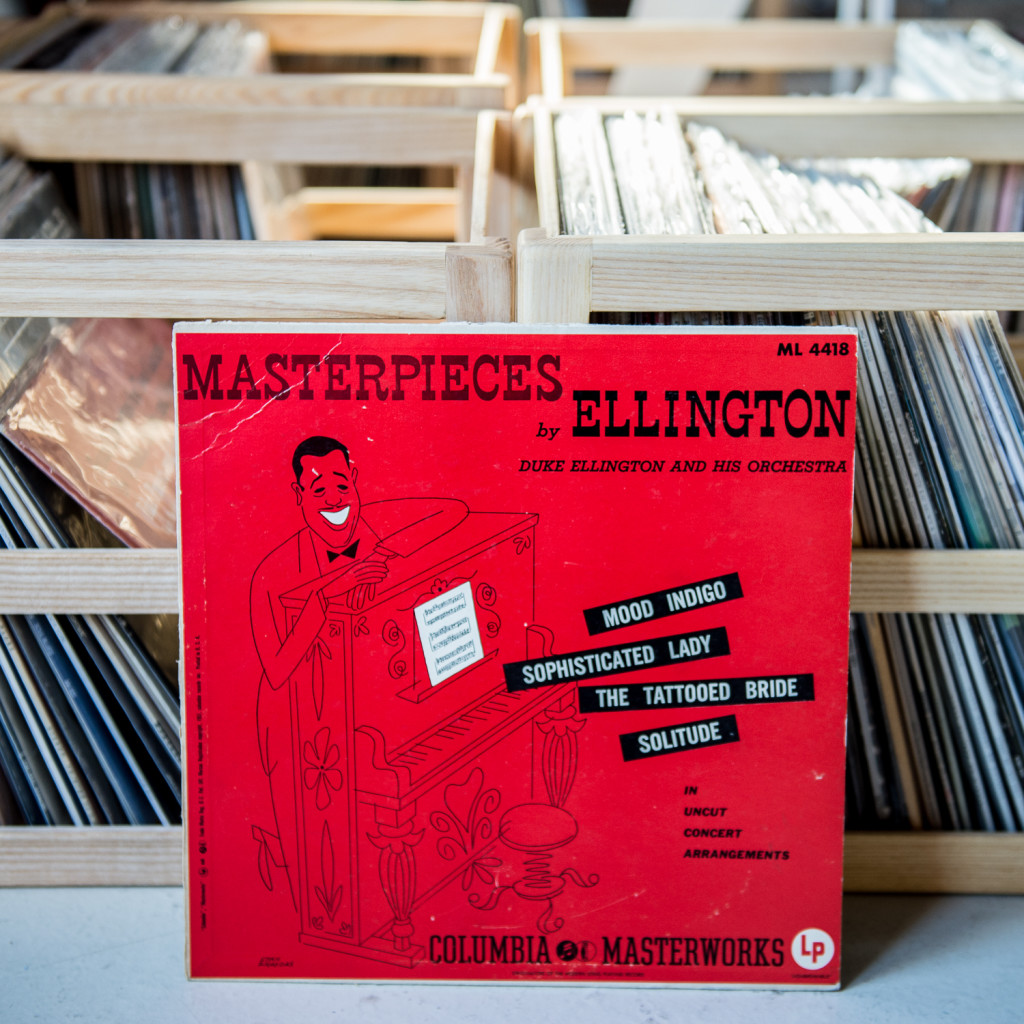 We listened, and we talked, some of the attendees brought music they had made or recorded or wanted to hear (as digital files) and Steve Guttenberg of CNET and Stereophile fame was kind enough to share his thoughts and experiences too. It was a very enjoyable day I think for everyone, but it really brought a number of things home to me.

These young people had all attended their university specifically because they wanted to study and graduate with a degree in the science and art of sound (at least one degree at Hartford demands that you intensively study/play a musical instrument in addition to the academic training in acoustics). They have already dedicated years of hard work, study, and student debt I presume, towards the reproduction of sound. I don’t think any of them had ever heard a really good audio system before, not in school or anywhere else. That got me curious, because I wondered, why would you want to do this if you had never had the transcendental experience of hearing amazing sound reproduction? With musicians, it’s about the music. Musicians can put up with the worst sounding crap for a speaker system, because deep down they know what the music is supposed to sound like. An acoustician, whom I hope would love music, is nonetheless interested in sound in a far more abstract and scientific way. So I asked, what did the concept of sound quality mean for them? The answers were illuminating. A young woman who presented a very well done multitrack recording which she was working on for her degree, answered that consistency was the most important attribute for her, that the quality should be evident across different sound systems and venues. While others voiced different aspects of this basic theme, the relevant idea remained that sound quality was most importantly about averaging things out so that whatever was being recorded, played, made, etc, would sound best for the most people. No one brought up the idea of making the best possible sound, period. That’s because the notion behind “the absolute sound”, a phrase coined by Harry Pearson who built a magazine of the same name that is still published today after 40 years, is not relevant for any of the young people who visited OMA. (Note- while I appreciate the name of the magazine, that’s as far as it goes vis this discussion.) 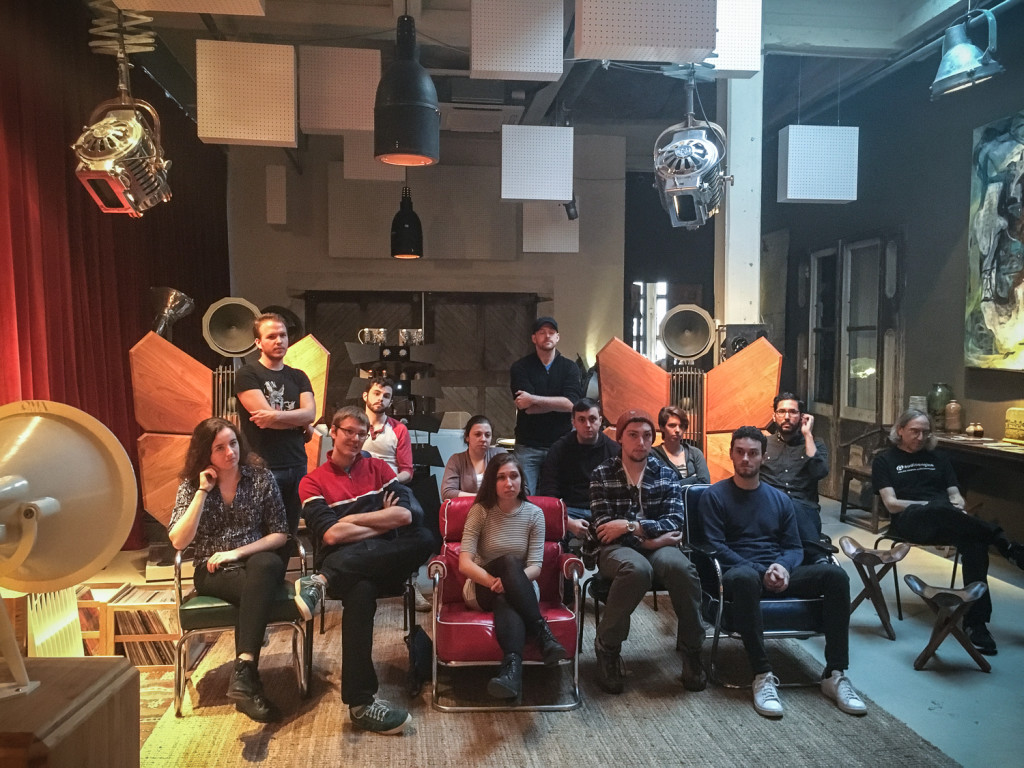 The concept of “the absolute sound” was simple- perfect verisimilitude to an acoustic performance in a real space. The problem is that recorded music today is very, very rarely an acoustic performance in real space. It is made by musicians and singers who record (closely miked)  in isolation booths, with take after take which get digitally stitched into and over myriad other tracks. And then everything is processed to a point where any resemblance to a human voice, for example, is tenuous to say the least. Kraftwerk did this 40 years ago, but I doubt they anticipated everyone sounding like this today… Adele, you listening?
We connected to the big OMA Imperia system via a laptop or a Bluetooth device that allows you to play anything you want off your phone. Either way, I know exactly how compressed a file is immediately- I just look at the position of the  volume knob for any given loudness.  A lot of the files played required the knob to be just barely open- that means the music is highly compressed to sound loud, and that is the end of any dynamic range in the music. Steve Guttenberg gave an impassioned plea to let music have some, but despite the youth of this group, everyone knew about the need for your music to sound as loud or louder. Steve also brought up Adele’s record breaking album release from the week before, and how incredibly awful it is from the standpoint of sound. The inevitable outcome of that discussion was: this is the sound people actually want. They have become so culturally conditioned to heavily processed sound, as Americans have become dependent on processed food, they want something that can only be described as “bad.”

That’s where the penny dropped for me. We started the day with the Ellington LP, which was a masterpiece of recording genius at a time when you could not multitrack (put multiple individual performances together seamlessly) or do any of the other things taken for granted today. Elvis studio outtakes from 1957, Muddy Waters from 1964, the Weavers live at Carnegie Hall in 1963; all were recordings these young people were not familiar with (nor anything similar), and certainly would have never heard properly. And it’s not just them. In the last six months especially I’ve had more than a few engineers and producers visit the OMA showroom who walked away with a new conception of what “sound quality” means. It’s important for me to share this with people in the industry, because I want sound quality to be better on the supply side, not just on my end. But we have a very, very, very long way to go. It really does feel like some point in the 1990’s in the US with food and beverage, where you could not find an espresso without going to a place with Italian waiters, cheese was American, Swiss or Monterrey Jack, beer was Coors, Miller, and a Heineken was something special.

Things changed, really changed, but it took a while.