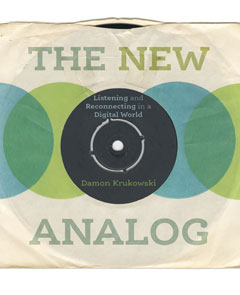 When people come to the OMA showroom for a demo, they always start with an analog LP, typically something around 50 years old. Time permitting, I’ll often jump to mono LP’s, and that can get even more ancient. I don’t do this because I have a fetish for old stuff, I do it because I want my guests to hear something many have never heard- what recorded music sounded like for most of its history.

I just finished an excellent new book by Damon Krukowski, The New Analog (The New Press, 2017). It’s well written and documented, easy to read, and has rather profound implications. His thesis is that digital technologies, in particular with sound production and reproduction (he was a musician in the rock band Galaxie 500) has changed our perception of the world in subtle but very important ways. Because sound is both arguably more significant than vision in how we orient and align ourselves in the world, and also largely an unconscious process that we almost never reflect on (even those in the audio industry) his conclusions are both valuable and disturbing. You might look at it as a metaphysics of sound, because even though he keeps his arguments firmly rooted in concrete examples about music production, microphones, studio technique, file sharing and the way our ears and brains work with sound, it’s really about how we know who we are and where we are in the real world in the age of digital sound. It’s about place, time and identity, albeit done in a very amusing way.

People rarely ask me why I play what I play during a demo, and I do mix it up. Time permitting, I like to cross as many periods and genres as possible. But the reason I open with the old stuff is simple- you can hear what three musicians in a room, playing with each other, sounds like (Muddy Waters, Folk Singer), or how Ellington on his piano with his big band and soloists, in Columbia’s studio on December 19, 1950 can each occupy physical space and be located in such, despite it being a mono recording (Ellington Masterpieces). Funny thing is, no matter how young listeners are,  and despite their musical tastes, people get this.

In the popular press, when I read about digital vs. analog and vinyl records in particular, you always hear the words “cold” and “warm” but that’s because the underlying technical differences between the two medium are so vast, and a quotidian vocabulary to describe it has yet to evolve. And that’s where Krukowski’s book is so useful, because it led me to one of the most critical differences between the two worlds, and it can be described in just one word: noise.

For humans, you could say that all sound is either signal (what you want to hear, someone’s voice, music), or noise (what you don’t want to hear, what you filter out). While we obviously focus on signal, it never exists without the background: noise. There is no such thing as silence: Krukowski relates the time John Cage went into an anechoic chamber, which is dead quiet. He was disturbed to hear two sounds, one low, one high. The engineer explained that the low sound was his blood circulating, the high his central nervous system in operation. Even in a perfectly silent space, humans will never hear silence. The way we process signal is in fact dependent on noise. If you were to enter a loud party blindfolded, everything would be noise. Now if you removed the blindfold and decide you want to concentrate on what one person is saying, your brain filters out the rest as noise. You can’t listen to everyone at once, that would be all signal. Which would become… noise.

The LP’s I mentioned were recorded to tape, which is analog of course, and it has plenty of background noise. The better the tape machine, the less the noise, and that’s one reason why recording music back in the analog period in big studio’s was so expensive- you needed to keep the equipment as quiet as possible to have the best recording, i.e. signal to noise ratio (those decks and tube electronics cost a lot of money). You can hear what tape sounds like on a good system- in the quiet parts of a recording you hear a faint hiss, and on Led Zep IV you can hear how the tape “printed through” with a ghost track preceding what Page laid down subsequently. When the Beatles overdubbed track after track on albums like Revolver and Sgt. Pepper’s, the accumulated noise from each layer of tape creates a texture like thickening a soup or stew. That’s the noise that was always part of analog recording.

Digital recording’s greatest breakthrough, sonically, was its complete, utter lack of noise. Digital presents only signal, no noise.  You could call this sonic VR.

The basic components of analog music production and reproduction are remarkably ancient. The record is over 100 years old, the microphone and the moving coil loudspeaker, which share the same concept of a moving diaphragm that generates an electric signal- about the same. The   carbon microphone invented by Edison that was in everyone’s telephone for most of its history picked up everything – not just your voice, but the family arguing around the kitchen table in the background. That’s why phone booths existed- without them the ambient noise, of the street, restaurant etc., would drown you out. Today, the smartphone has not one but three mics, which it uses to beam form and cancel out all the noise that’s not you speaking- the signal.  That’s how you can talk in a crowded cafe and be understood while the person across from you can’t make out what you’re saying. We’re still used to the idea that a phone picks up surrounding sounds- yesterday I had someone hold up their phone to their speakers in the background so I could hear something- all I heard was blackness. Old phones used to have “side tone”- you could hear yourself talking. Now people yell into their phones because they have no idea what they sound like. You sound the same if you are in Croatia or Krumsville, PA. And the phone further filters your voice to remove everything in it which its algorithms don’t consider signal- all the little inflections, tonal nuances and other things which make your voice unique and human are filtered away to conserve bandwidth and preserve signal integrity.

Krukowski offers a cogent history of the development of digital loudness technology, which resulted in the “Loudness Wars” which persist to this day, and have dramatically reduced the dynamic range of recorded music. But he also delves into the concept of time in analog versus digital recording, a subject he’s clearly well versed in as a musician. Analog used tape to record music, which had to be manually spliced and recorded over to place sounds in time. Digital is freed entirely from any physical constraints, and as such, there is no “time” in digital music except an absolute, arbitrary time that is set within the computer. Any sound or effect can float anywhere in what you might call non-time.

I don’t think any of us reflect on how the operation of our cell phones may unconsciously affect how we perceive sound and music writ large. If you live in a cosmopolitan society, you have no choice but to face a barrage of contemporary music in just about every public space. The music you may be listening to on your commute, at work or leisure probably is unmoored in several important ways from the physical reality that previously contained it. All of this is bound to affect how we are and how we see ourselves in the world. Without our ever thinking about it.

In case you’re thinking OMA is like a wax museum of sound and its reproduction, I love techno, which has no connection with any music or reality that came before it, and in the last year alone we had LP release events at our showroom for albums from Patrick Higgins (Bacchanalia) and Nils Frahm which are far from purist analog works.  But I cringe when I hear most music made today. Just as I have no desire to eat synthetic food, I want music that nourishes.