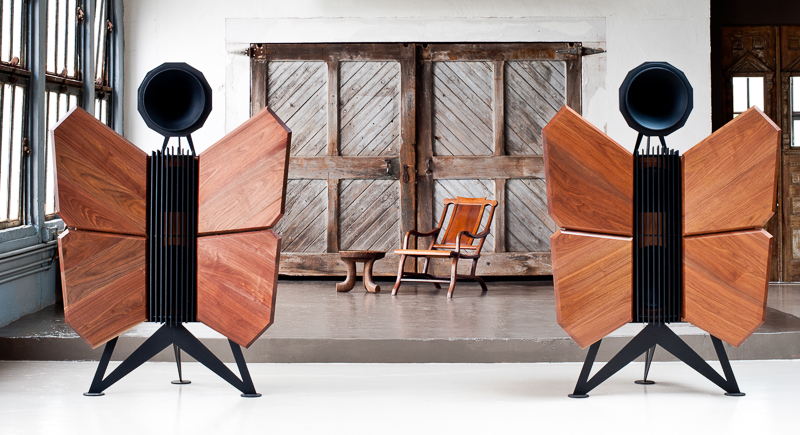 There’s a big hole in the OMA NYC showroom right now. The Monarchs flew out the door last Thursday. Columbia Pictures is remaking the movie Annie, and the film’s set decorator wanted them for the penthouse apartment of the tech billionaire Stax, who I understand replaces Daddy Warbucks, at least in name. The speakers were trucked right to World Trade Center Tower #1, which is still unfinished. The filmmakers got the whole 55th floor to make into the Stax set, where I hope the Monarch’s play at least a walk on role.

I had a nice chat with the art director. The only time he had ever looked for audio equipment to put in a film before were as set pieces to recreate a recording studio or radio station. Otherwise, as we all know, no one wants to look at speakers, which is why interior designers always press their clients into putting speakers in the ceilings or walls, as in department stores, hospitals and other places which do not invite lingering. In short, speakers have earned their reputation as ugly boxes which people who like music put up with. With OMA, we obviously took a different path, but we really did so out of necessity.

The Monarch is a big loudspeaker. It’s a bit over 6 feet high, and almost as wide wing tip to tip. Because it’s a very striking design, the obvious inference is that OMA makes these things to look striking, and then figure out how to put the actual speakers inside and make them sound good. In fact it’s the opposite. We come up with an acoustical design, which any other audio company would reject out of hand as impossible to market (if only by virtue of size) and then make it look like something you’d want even if you never listened to it.

You may have read elsewhere on our site that we’re the only hi fi company in the world making conical horn speakers (a conical horn has straight sides, all other horns have curved walls, like a megaphone vs. a trumpet.) I’ve often wondered why this was so – conical horns sound so much better and more lifelike, but I think the answer is pretty simple: size. Conical horns are much, much larger than their curved counterparts. Conicals can be twice as big, something we knew at OMA from the beginning. And since the non horn (bass) part of the speaker also has to be really large if it is going to be ultra high efficiency (like horns, in the high 90-100db/1watt/1meter range) you are dealing with very big things. The high end audio industry has been following exactly the opposite path for the last 40 years- reducing the size of all audio components, and especially loudspeakers, to the smallest possible size and footprint. They did that thinking the consumer wanted everything as small as could be.

When we first finished the renovation of the Mill in the late 1990’s, (and by finish I mean the floors were no longer covered with two centuries of dirt, and we had a single toilet, shower and a cookstove), I showed some pictures around. It didn’t take long. Ralph Lauren rented the Mill for a week to shoot their new line of “Cottage” furnishings. I was thrilled, not just because of the check; I’d always liked the Lauren interior look (their stores are acknowledged as having some of the best set decoration anywhere). So for an entire week I’d get to see the Mill transformed with literally truck loads (2 tractor trailors) of product and props, by talented art directors. And I was a little sad, too, because I knew it was expensive stuff and there was no way we could afford such things, and so it had a bit of a Cinderella quality.

You can imagine my surprise when the movers started bringing the “merch” inside. Or at least tried. The Mill was an industrial building, albeit from the 1700’s. The front door is wider than a typical house door, and I’d given the crew the critical dimensions of every door into the building to an 1/8”. A lot of stuff was not getting through the front door nonetheless. I made some calls, and a friend built a wooden bridge into the second floor double width opening over the arch where water entered the Mill, and 9 and 10 foot sofas were carried over the guard rail and onto the bridge in a scene evoking the days of porters carrying unspeakable loads for British lords. Quite Ralph Lauren, actually…

I’d never seen furniture like that before. Everything was supersized by 50% or more. It was kind of like Ethan Allen on steroids. I knew that Americans were getting a lot heavier, but this stuff was for people who weighed a quarter ton. It was also exceedingly ugly, which made me happy because I didn’t want a single thing staying behind.

That was also the time I had a really classic early Jeep Wagoneer (4 door, no wood on the sides.) That car was really one of, if not the progenitor, of the SUV, which was just showing up. In traffic, my Wagoneer, which was of substantial size, looked miniscule.

This supersizing of every day objects continues unabated, having destroyed the aesthetics of wrist watches, which are now virtually all larger than the real ones the Luftwaffe  bombers wore (so they could see the time easily at night) during WWII. Those were big watches, by the way. This process of the ballooning of things has a very cartoonish quality to it.

So back to loudspeakers. While there is no good reason, and also a lot of bad ones, to enlarge the proportions of domestic vehicles, furniture and other such things in our lives, there is a very good reason to do that with loudspeakers. One reason is what you can call “source size.” Small musical events, like a girl with a guitar, can be reproduced nicely by small drivers, especially if you are sitting on top of them.  But if you want to listen to the Stones live or a symphony orchestra, that’s just not going to happen convincingly from a vertical collection of some 6 or 8 inch woofers with a little dome tweeter. The radiating area of the cones and domes is not large enough to convey the sonic event. Efficiency is way down with these systems as well, necessitating huge amplifiers with hundreds of watts of power just to get any realistic sound pressure level (SPL).  The only place where supersizing makes any sense, if you still believe in “form follows function” as the sine qua non of design, is with loudspeakers.

If you still don’t believe me that the larger the speaker, the larger the sound, ask yourself why pianos in concert halls are still so big. “Can’t they make them smaller, with today’s technology?”, you might ask. And who ever walked into the Steinway showroom looking for a grand piano and said to the salesmen: “What’s the smallest thing you’ve got?” We want big when it conveys wealth and status.

We knew we were bucking the trend by using conical horns, and coming out with purposefully big loudspeakers, like the Monarch, because we knew it was a sonic necessity. And we also knew that would never work unless we made speakers so beautiful in design, so sculptural, that people would desire and be fascinated by them, having never heard them. The man from Annie came to us looking for that special something. His film’s billionaire was different from his predecessors. No old masters hanging in dark wood paneled rooms where men smoked cigars. This new billionaire is modeled on someone like Bill Gates- his art collection is digital, and is projected as virtual art. But sound is not virtual. So for this film’s Big Daddy, looks like the Monarch is the new Steinway.