I’m not a Luddite. I have a profound respect for past technologies, but sometimes they deserve to be just that- past technologies. And so I felt until recently about one of the most obscure aspects of speaker technology: the power supplies for field coil speakers like the Cogent drivers we use in the OMA Imperia.

Back in the golden age of sound, the cinema speakers of the 1920’s and 1930’s, virtually all of the speakers were “field coil” or electromagnetic. At that time, the kind of permanent magnets we now take for granted in speakers did not exist. They came later, a result of the improved metallurgy after WW2 (specifically, AlNiCo). Those field coil speakers are a high point in the history of sound, and most are very rare and highly sought after (and expensive).

Because these speakers use electromagnets, they also need DC voltage to energize them (typically either 13v DC or 110v DC). To produce DC voltage from the AC mains is a process called rectification, and today it’s a simple, easy and cheap thing to do with solid state devices. But it was very different 80 years ago. General Electric had invented a rectifier tube filled with argon gas and a tungsten filament in 1916 (which was really cool looking, by the way) trademarked Tungar, and ever since these kind of huge tube DC supplies are just called “Tungars.” After WW2 permanent magnets became powerful enough that those wonderful old field coil drivers were no longer necessary, and they became extinct, along with the big, expensive Tungar supplies necessary to run them.

This stuff is so obscure that if you try talking about it with professional speaker designers today they would probably have no idea what you were going on about. The industry is either a-historical or deeply amnesiac. 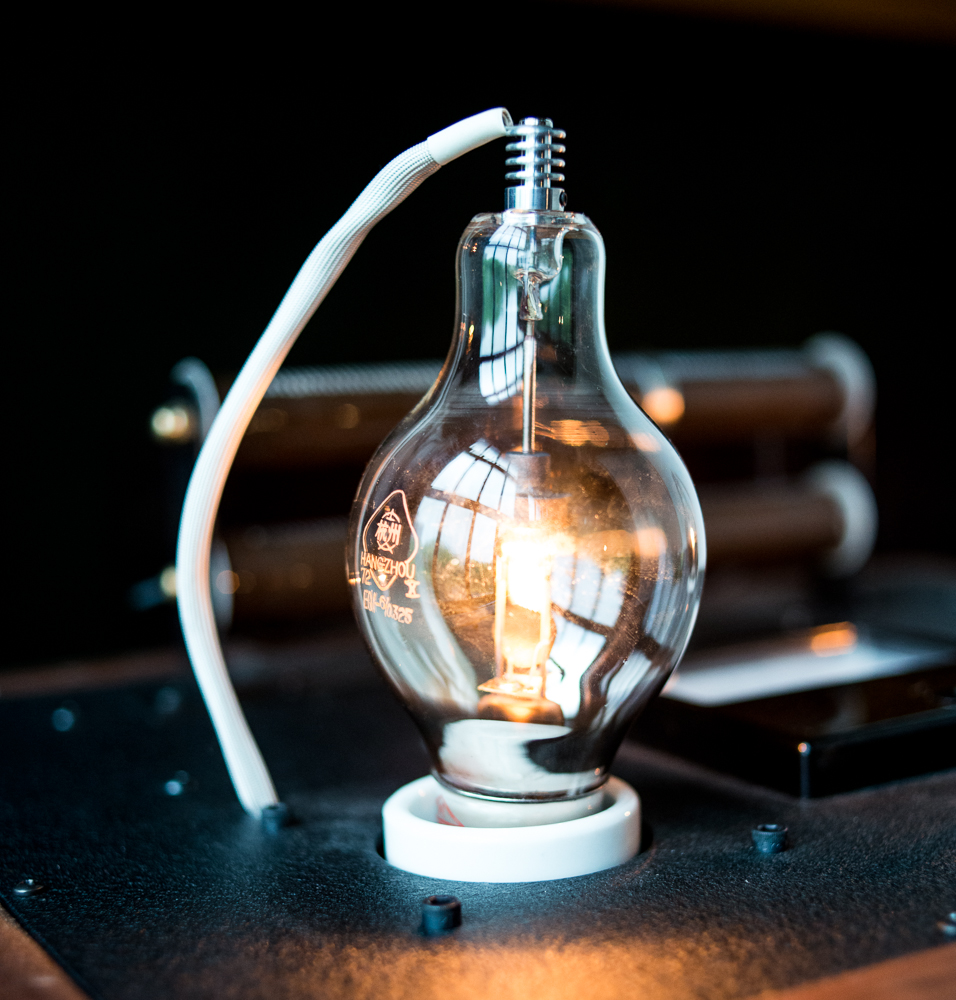 Although I knew that Japanese audiophiles in particular had always claimed that Tungar supplies made their vintage speakers sound better, I was skeptical, to say the least. I’d seen the cult of Western Electric, with its irrational exuberance, and the idea that everything old is good strikes me as absurd. The DC power supply that a speaker uses, whether its the RCA MI -1428 or the Cogent driver we use in our Imperia system, is only using that 13 volts DC to energize a magnet. Thus a battery should be the best source of DC. So I bought a huge 200 pound monster battery used in Caterpillar earth movers from the Deka battery plant across the valley from Oswald’s Mill in PA and hooked that up to my RCA speakers back in the old days before OMA. I could hear no difference between the battery and cheap, switching power supplies from Radio Shack, and so for years I assumed that DC power made no difference. How wrong I was…

Many years later, a trusted friend with a lot of experience with field coil drivers let me on to something he’d recently discovered; those old Tungar supplies really did sound different, and a lot better, than anything else. As I already had some vintage RCA Tungars  in our reference collection, it was not a big deal to hook one up and have a listen. It’s such an odd thing to feel happy and stupid at the same time. And that’s exactly what happened.

Normally when you try something in a system and there is a really big improvement in sound quality, you are happy. I was happy to hear a system I knew very well sound  much better, because we had changed nothing more than the power supply. I was chastened, however, because for years I had not bothered to investigate for myself whether these old Tungar supplies would make a difference, and in fact I was prejudiced against them having any effect at all. I felt like an idiot for not finding out for myself sooner.

Although this gets very technical and very arcane quickly, the fact that just the kind of DC used to energize a magnet in a speaker could make a very audible difference to the sound quality of that speaker means that the quality of the magnetic field, or flux, in a speaker is yet another meaningful aspect in sound reproduction. And that arguments about the different types of magnets used historically in speakers (field coil, AlNiCo, Ceramic and now Neodymium/Rare Earth) have ground for validity. In the best of all possible worlds, loudspeakers would be made with field coils and powered with DC Tungar supplies. In the real world, that is too impossibly expensive to ever happen. The results of our experiments with the Tungar supplies did have one beneficial outcome- the new OMA TS-1 DC Power Supply. After hearing the difference for myself, there was no way we could not offer this technology to our clients with systems using the Cogent driver, and in the future, we’ll be manufacturing our own field coil loudspeakers. There are also plenty of great vintage field coil speakers which would benefit from the TS-1 DC so although I know it’s never going to be a best seller, it’s another one of those things which OMA makes not because of our bottom line, but because our line is the best possible sound.